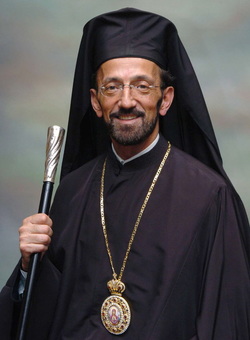 His Eminence Metropolitan Gerasimos was born in Kalamata, Greece to Nicholas and Anastasia Michaleas. Upon successful completion of his elementary and secondary school education in Greece, he immigrated to the United States. In 1970, he enrolled at Hellenic College in Brookline, Massachusetts, where he received his B.A. with High Honors in 1973. That same year, he was admitted to Holy Cross School of Theology, where he completed his M.Div. Degree in 1976 with High Honors.

In 1977 he joined the administration of Hellenic College/Holy Cross, serving as Registrar until 1979. During his tenure in this post, he organized and updated the Registrar's Office, creating the Office of Admissions and Records for the school.

He was ordained to the Diaconate in 1979 and was called to serve as Archdeacon to His Eminence Archbishop Iakovos, a position he held until 1996. Concurrently, he was appointed Dean of Students at Hellenic College/Holy Cross from 1980 until 1999. As Dean, he created the “Orthodox Actionline,” the first Archdiocesan telephone ministry directed towards those who do not have substantive ties to the Church. Eventually, this ministry became an official part of the Office of Field Education at Holy Cross.

Also during his tenure as Dean of Students at Hellenic College/Holy Cross, he became centrally involved in the success of various programs benefiting future priests of the Greek Orthodox Archdiocese of America and their families. Specifically, he organized and monitored programs that evaluate and assist individuals at Hellenic College/Holy Cross with development in both their emotional and spiritual growth. These programs have been modified to suit the needs of the institution’s current student population.

While maintaining his position as Archdeacon and Dean of Students, he was appointed a member of the staff of the Outpatient Clinic of the V.A. Medical Center in Boston, a post he held until 1996.

In 1998, he became Director of Admissions and Records at Hellenic College/Holy Cross. In 2000, he became Administrative Assistant to the Rev. Nicholas Triantafilou, President of Hellenic College/Holy Cross, a post he held until he was elected Bishop of Krateia by the Holy and Sacred Synod of the Ecumenical Patriarchate in December of 2001. He was appointed by His Eminence Archbishop Demetrios as Chief Secretary of the Holy Eparchial Synod of the Greek Orthodox Archdiocese of America. As Chief Secretary, he assisted the Synod in the promulgation and realization of its decisions.

In the area of academic achievements, he taught courses in Psychology at Hellenic College, as well as courses on Teleturgics at Holy Cross. Since 1985, he has been Senior Lecturer in the field of Personality and Psychology at Northeastern University, University College. The University Press of America published his dissertation in 1994. He is the author of a number of articles published in periodicals in the area of psychology, and is a member of the American Psychological Association (APA) and the American Counseling Association (ACA).

On February 22, 2005, the Holy and Sacred Synod of the Ecumenical Patriarchate selected him to be the new Metropolitan of San Francisco. On April 2, 2005, His Eminence Archbishop Demetrios of America presided over the Enthronement Ceremony at the Ascension Cathedral in Oakland, California. Since that time, Metropolitan Gerasimos has served the faithful in the Metropolis of San Francisco, focusing much time and effort on the expansion of ministries and the development of new programs, including the Family Wellness Center. 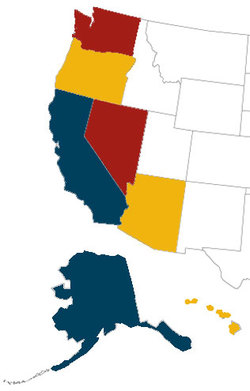 There are several ministries within the Metropolis, all managed by volunteers. These ministries generally rely on their own limited funds, and most receive no direct support from the Metropolis due to budgetary constraints. These ministries include: Church Music, Family Wellness Center, Folk Dance Festival, Greek Education and Culture, Kids ‘N Cancer , Religious Education and Christian Formation, and a wide range of Youth and Young Adult ministry programs.

Since the Greek Orthodox Archdiocese of North and South America was established in 1927, the Diocese of San Francisco has been one of its important components, although her boundaries have shifted from time to time, and likewise its Holy See has shifted between Los Angeles and San Francisco. The growth of this Metropolis has been continuous. In 1979, the Diocese of San Francisco numbered 47 parishes. The Metropolis is now comprised of 67 parishes and missions in the states of Alaska, Arizona, California, Hawaii, Nevada, Oregon and Washington. There are also three vibrant monastic communities: St. Anthony’s Monastery in Florence, Arizona; the Monastery of the Theotokos the Life Giving Spring in Dunlap, California; and Saint John the Forerunner Monastery in Goldendale, Washington.

Through the seven decades since the Greek Orthodox Archdiocese of North and South America took its present form, the Metropolis of San Francisco has been one of its important components, though its boundaries have shifted from time to time, and likewise its seat, between Los Angeles and San Francisco.

The seat has had a number of distinguished occupants: Bishop Kallistos (Papageorgapoulos 1927-1940), and Bishop Eirinaios (Tsourounakis 1941-1944) both bore the title of bishop of San Francisco. Bishops Athenagoras (Kokkinakis 1950-1955), Demetrios (Makris 1955-1968), and Meletios (Tripodakis 1968-1979) were titular bishops (of Elaia, Olympus, and Christianoupolis, respectively). The election of Bishop Anthony (Gergiannakis, 1979-2004) in 1979 coincided more or less with the canonical restructuring of the Archdiocese. Having served one year in the Diocese of Denver as Titular Bishop of Amissos, he was enthroned on June 7, 1979, as the Bishop of San Francisco. On November 24, 1997, the Holy and Sacred Synod of the Ecumenical Patriarchate elected His Grace Bishop Anthony as Metropolitan of the Dardanelles and Exarch of all Hellespont. In September 2002, the Diocese of San Francisco was declared the Holy Metropolis of San Francisco, and Metropolitan Anthony was named as Metropolitan of San Francisco.

Following the passing of Metropolitan Anthony on December 25, 2004, the Ecumenical Patriarchate of Constantinople elected His Eminence Gerasimos, formerly Bishop of Krateias, as Metropolitan of San Francisco.